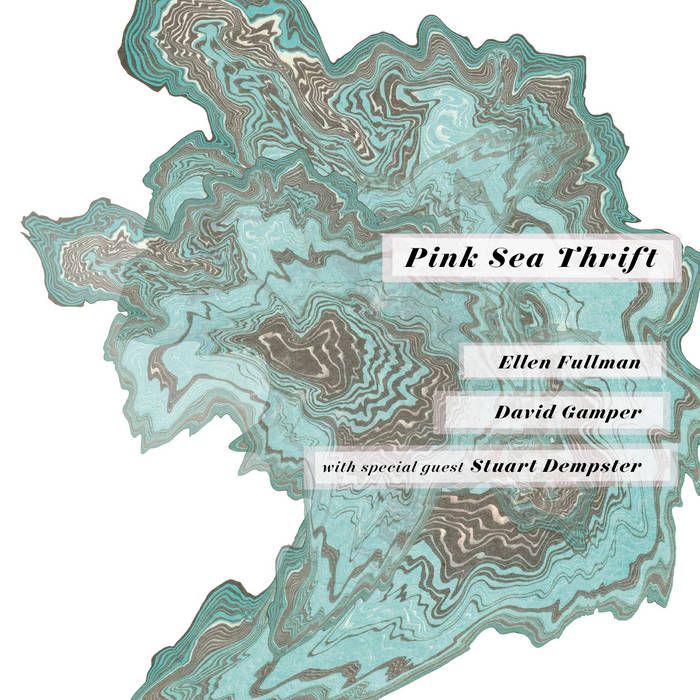 Pink Sea Thrift is a collection of pieces by the iconic American composer Ellen Fullman in duo with David Gamper, an original member of Pauline Oliveros' Deep Listening Band. These ecstatic and mesmerizing improvisations were recorded in the resonant gym of the Headlands Center for the Arts in Marin, California. The album also includes two tracks of Ellen Fullman in duo with founding member of Deep Listening Band, Stuart Dempster, on trombone and didjeridu.

Through an accidental discovery in 1980 of the longitudinal mode of vibration, Ellen Fullman invented the Long String Instrument, which has remained at the core of her creative life. The process of refining and articulating this instrument has led her to experimenting with wire alloys and gauges; designing wooden resonator boxes and bronze tuning capos; creating a graphic notation form that defines time by distance walked, the study of natural tuning, and North Indian vocal music, among many other things. Her work has been cited by Alvin Lucier in Music 109: Notes on Experimental Music, and by David Byrne in How Music Works. She has been the recipient of numerous awards, commissions and residencies including: Foundation for Contemporary Arts Grants to Artists (2015); Japan/U.S. Friendship Commission/NEA Fellowship for Japan (2007); and DAAD Artists-in-Berlin residency (2000).
www.ellenfullman.com

Sonic artist David Gamper (1945-2011) moved freely among the worlds of composition, improvisation and electronic instrument design and construction. He believed electronic sound processing technologies constituted an extension of the acoustic musical instrument. Unlike more single-minded proponents of musical technology, Gamper’s music was a marriage of traditional instrumental performance with the sound transformations introduced by new and emerging technologies. He named his performance technology “The Sound Shifter” and with it he captured the live sounds of his instruments (piano, winds, and others) and electronically shifted them into other musical realms. As a member of Deep Listening Band, Gamper developed a major redesign of the Expanded Instrument System (EIS). Gamper was also half of See Hear Now, (with photographer Gisela Gamper) a visible music sound and video projection duo.

Stuart Dempster, sound gatherer, trombonist, composer, didjeriduist and professor emeritus at the University of Washington, was a founding member of Deep Listening Band. Dempster has recorded for numerous labels including Important, Taiga, and New Albion. Releases include “In the Great Abbey of Clement VI" at Avignon—a "cult classic"—and “Underground Overlays from the Cistern Chapel” consisting of music sources for a 1995 Merce Cunningham Dance Company commission. Grants include being a senior Fulbright scholar to Australia in 1973 to study didjeridu, and a Guggenheim Fellow in 1981 where he developed his “Sound Massage Parlor.” He commissioned Sequenza V (1966), an early installment in Luciano Berio's series of Sequenzae that codified new standards of virtuosity for solo instrumentalists. His landmark book, The Modern Trombone: A Definition of Its Idioms was published by the University of California Press in 1979 (reprint edition, Accura Music, 1994).